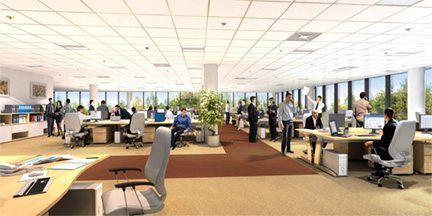 When it comes to startups and other so-called progressive companies, the majority have open office space layouts. It is now generally assumed that workers frown on cubicles and prefer a transparent “open” style working office space. Yet many human resources experts are beginning to question whether this trend has reached its peak. Plenty of office managers who scrapped the cubicles in favor of an open office space layout have reversed course. Others are considering switching back to those familiar cubicle walls. The unfortunate truth might be that the open office space trend has gone too far.

An Office Space of One’s Own

Consider what the average cubicle-dweller must to do have a face-to-face interaction with a peer. He must stand up, walk over to the co-worker’s cubicle and half-surprise him with an unannounced arrival. This is precisely part of the motivation to take down those cubicle walls for a totally open format. Yet one problem that office managers did not anticipate in the open office space layout was the lack of personal space. Sitting at a table or desk without barriers deprives one of a semblance of privacy. So don’t be so quick to tear down those unsightly cubicle walls. They really do increase employee comfort to the point that some individuals are actually more inclined to come to work because they value their cubicle’s safe space.

The Numbers Behind the Open Office Space Transition

Though open office space layouts have exploded in popularity, look for the statistics to do an about-face in the near-future. Over the past two years, about 80 to 90 percent of office spaces renovated had an open floor plan element. This staggering statistic is a testament to the typical office manager’s push for a more communal working space that allegedly fosters collaboration and open lines of communication. However, a study conducted by Harvard Business School professor Ethan Bernstein found that corporate headquarters that transitioned from cubicles to the open office space design suffered a 70 percent drop in face-to-face interactions. E-mail messages jumped in response to the open office space design. It is thought that workers shifted to wearing headphones as a result of a move to the open office space space, prompting a hesitance for others to interrupt. Some believe that the transition to an open office space space design decreases one’s willingness to share sensitive information in-person. As a result, communication often declines. It is quite ironic, considering that increased communication is one of the primary motivators for making the transition to a more open working environment in the first place.

Plenty of workers, architects and designers are pushing back against the open office space layout movement. They argue that the open design harms workplace productivity and even dampens worker morale. The truth is that open working spaces are a little bit too chaotic. There is too much stimuli coming from all directions. People desire some sort of small office space they can call their own, even if it means they have to “gopher” up over their cubicle walls to see their co-workers. Those cubicle walls really do drown out some of the phone conversations, unlike open office space layouts in which words are coming from all directions. Look for the movement against the open office space format to continue to grow as more and more workers long for the comfort of their old cubicle walls.

If you would like more information regarding office buildings available in the greater Boston market, contact Jeremy Cyrier at [email protected] or by phone at 617-340-8520.